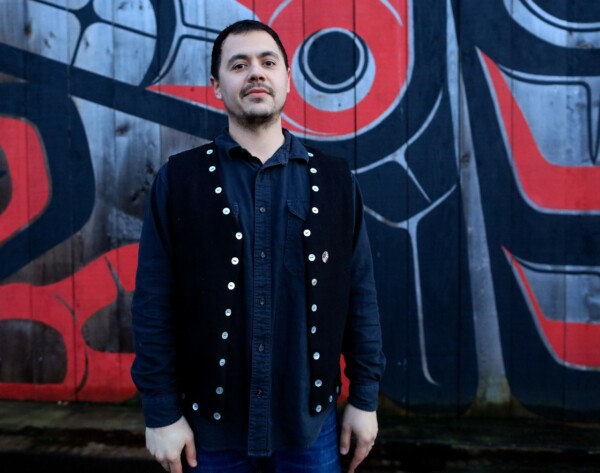 Clifton Guthrie is a Tsimshian artist of the Laxskiik clan from Metlakatla, Alaska. He was born and raised in Metlakatla. and moved to Seattle after he completed high school in 2006.
Clifton's passion for Tsimshian culture and art was ingrained in him from childhood. Much of his youth was spent listening to his great-grandfather’s stories, attending potlatches and participating in raising totem poles. In 2014, Clifton was given his Tsimshian name Holtka Xsoo, which means “Full Canoe”, because he was always busy working on various projects.
In high school, he began studying under Tsimshian carver Jack Hudson and he continued carving, painting, and glass etching while he attended college.
In 2011, Clifton was invited to apprentice under renowned Tsimshian carver and culture bearer David A. Boxley. He began to deeply study the art of design and creating masks, bentwood boxes, drums, totem poles, and other wood work. Clifton continues to explore and share his design, carving, and cultural knowledge under the watchful eye of David A Boxley, while working alongside David R Boxley, a celebrated artist in his own right.
Since 2011, Clifton has had the opportunity to assist David Boxley on carving Totem poles and other large projects, including the Tsimshian Housefront installed for the Sealaska Heritage Institute. Clifton has also created his own career path, with many of his carvings selected for gallery and museum shows including Museum of Anthropology’s “Claiming Space” Exhibit, Evergreen State Longhouse 20th Anniversary show, Burke Museum permanent collection, and the 2018 Celebration Juried Art Show.
Clifton worked in Seattle as a full time carpenter for 10 years while continuing to advance his cultural knowledge and produce Tsimshian art in various forms. In 2018 Clifton decided to put his tool bags down and move back home to Metlakatla, Alaska to focus on family, culture, and carving full time.