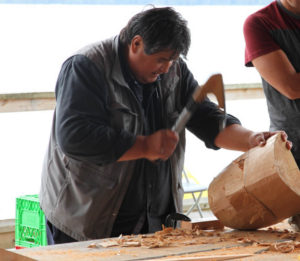 Tim is a Nuu-chah-nulth artist from Esperanza Inlet on Vancouver Island. He has held the position of First Carver at the Royal British Columbia Museum, where he oversaw numerous commissions for totem poles for international sites such as Wakefield Park and Yorkshire Park in England, Stanley Park in Vancouver, and in Auckland. He left this position to oversee a program focussing on Native education for the Port Alberni School Board and Vancouver Island.

He is part of the Legacy collection and the Out of the Mist—Treasures of the Nuu-chah-nulth Chiefs collection of the Royal British Columbia Museum and the “Down From the Shimmering Sky” travelling exhibition that opened at the Vancouver Art Gallery. He has a vast knowledge and understanding of tradition and history, which has influenced his work as an artist, environmentalist and teacher.