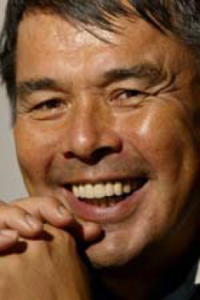 Reg Davidson is a well-established Haida artist with a career that has spanned several decades. He began his artistic training in 1972 under the guidance of his father, Claude Davidson, Chief of the Village of Dadens, on Haida Gwaii.  He also apprenticed with his well-known brother, Robert Davidson.

One of his first monumental solo projects was a thirty-foot totem pole that he was commissioned to carve in 1980.  Davidson had his first solo exhibition in 1991.  For this show, he produced several major works - a large red cedar Frog Sculpture, an exquisitely carved Chief's Seat and a nine-foot Eagle/Killer Whale Totem Pole.  He has had pieces featured in several major exhibitions including "Raven Travelling: Two Centuries of Haida Art" at the Vancouver Art Gallery in 2006 and "Challenging Traditions" at the McMichael Museum in 2008. He has produced several other monumental pieces, including a totem pole for British artist Damien Hirst in 2008. His work is highly sought after by private and public collectors worldwide.

Davidson is a founding member of The Rainbow Creek Dance Group, a group that performs at major ceremonies and potlatches.  Davidson produces much of the regalia for the group - including masks, drums and dance capes. This involvement has greatly influenced his development of a distinct carving style. His understanding of a mask's function and movement impacts the way in which he carves them, this context has informed his art.

"In the old days, everything that was made had a function and today most things are wall hangings. Early on I did an eagle head piece that did not fit anyone and only after learning to dance changed my style. All my work is functional or can be made functional very easily. Usually I make something and use it for a while."