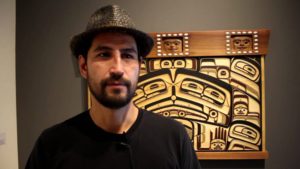 Paul is a Tlingit & Haida artist living in Portland, Oregon. He weaves both contemporary and traditional cedar bark hats. He took a day-long hat making course one day, and his passion blossomed. He has been mostly self-taught and strives to make wearable art which reflects the rich traditions of the Pacific Northwest’s tribal history.

Paul carves his own hat blocks, making for his own custom hat styles and a perfect fit. He sometimes embellishes his hats with abalone buttons and feathers, and often times weaves other materials into the hats such as sweetgrass.

Threading to Past Paul Rowley Sold