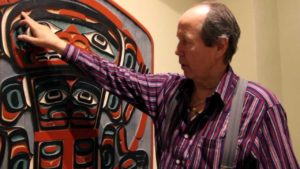 In 1965, through a close association with members of the Henry and Helen Hunt family, John began a lifelong interest Northwest Coast native art and culture. Henry Hunt (d.1985) and his son Tony Hunt had taken over as head carvers at the Thunderbird Park carving program of the BC Provincial Museum in Victoria from the late Mungo Martin.

John began a carving and design apprenticeship at the Thunderbird Park workshop under their tutelage while still attending school and working part-time. During the summer, he was learning the basics of Northwest Coast Indian design in the traditional Kwagiulth style, along with basic tool techniques and hand skills. During this time, John was producing smaller carvings on his own but also was able to participate in the larger carving projects being made by his teachers. After graduating in 1968, John decided to pursue Northwest Coast Indian art as a career and began carving on a full-time basis.

Since the early 1970s, initially as part of his apprenticeship with Tony Hunt and later as his assistant carver, John worked on over 25 large totem sculptures in the workshop. During this time the Hunt family also formally adopted John during Potlatch ceremonies given by them. At this time, names and dance privileges were taught and given to him. Since that time, John has produced many ceremonial artworks to be used by many families during these Potlatch ceremonies.

Many of the large totem projects involved giving traditional ceremonies to dedicate these artworks in their various locations all over the world. Since 1979 a dance group, “The Hunt Family, Fort Rupert Dancers” was formed. John became very involved in coordinating and organizing these ceremonial Dance Performances. On occasion, this involved groups as large as 15 persons, 300 pounds of crated dance gear and on one occasion, and a seven-city tour of Europe for 21 days. John helped organize and participated in more than 20 such dance performances all over North America and Europe.