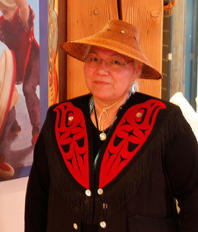 Jean Taylor is from the Dakhl awedi Clan of the Teslin Tlingit Nation. She loves to paint people of her culture in regalia and enjoys capturing the dynamic movement of dance which is encouraged by plenty of positive feedback. She is especially fond of painting grandmothers and most recently is painting totem animals. Portraiture, however, remains her favorite activity.

A Gesture of LoveJean Taylor $2880

Sorting and Sampling the HarvestJean Taylor $1800