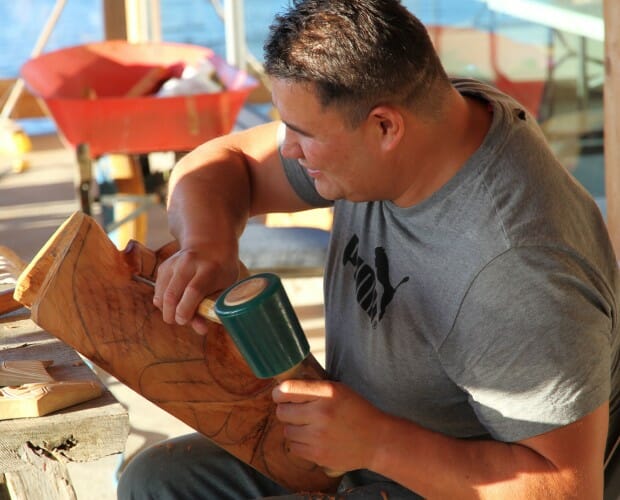 Gordon is Nuu-chah-nulth from the Tseshaht tribe on the West Coast of Vancouver Island where he grew up and still resides. At an early age, Gordon received traditional teachings and values from his grandparents, Alan and Agnes Dick. It was these stories and teachings from his family that Gordon's artistic vision was born.

Gordon began training as an artist when he was fifteen. He has worked in a variety of mediums, including painting, drawing, ceramics and woodcarving. Gordon is a fine jewelry engraver and repoussé artist, working in gold, silver, and copper. His original designs are both contemporary and traditional, combining a variety of metals and precious stones. Each creation is a unique piece of wearable art. He also incorporates his skills in metal work into his wood carvings, for instance, adding a meticulously hammered copper handle to a beautiful steam-bent Wolf rattle that took seven years to complete from concept to actualization.

Gordon is a passionate wood carver. In the summer of 2005, he worked under the highly respected master artist Tim Paul, carving two 25 –27 foot totem poles for Tseshaht territory.

In 2009, he was commissioned to carve the doors that welcome visitors into the newly built Tseshaht Administration Building in Port Alberni. He completed a 23 foot totem Pole for Tseshaht to commemorate the Residential School survivors of Port Alberni Residential School. This pole was raised in April 30, 2010.

Gordon’s passion for his art is his way of expressing his dedication to give back to his culture. He hopes to inspire other Nuu-chah-nulth artists to carry on the art traditions of their people. Gordon is dedicated to learning the rich culture, ancient stories and art of his tribe.