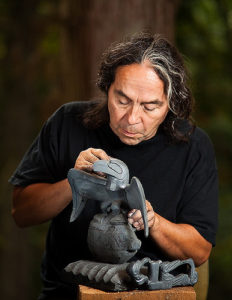 Lionel Dexter Samuels was born into the Yahgu ‘laanaas Raven clan in Queen Charlotte City on Haida Gwaii(formerly known as the Queen Charlotte Islands), in British Columbia, Canada in 1963. His family crest is Raven. Lionel began carving with the guidance of George Yeltache when he was just seven years old. When he was twenty, he began sculpting argillite professionally and featuring his work in major galleries.

Lionel works primarily with argillite, but also skillfully carves wood and silver. Argillite is a sedimentary rock made of petrified mud found at Slatechuck Creek on Haida Gwaii.

His argillite works are incredibly sculpted with carefully incised designs. He creates large figures, totem poles, pendants and earrings, pipes, and boxes. He enjoys creating pieces featuring Haida mythological and spiritual creatures such as Ravens, Frogs, Eagles, Killer Whales, and Sea Monsters. He is inspired by his ancestors, and the Haida stories of his Grandparents. His Grandfather was a famous Haida carver—Captain Andrew Brown.

Lionel also professionally restores historical Haida argillite sculptures for the Smithsonian Museum in Washington D.C., and the Royal British Museum in Victoria, BC. His argillite sculptures are eagerly sought after by collectors from around the globe. Some of his most recent pieces have been showcased in the highly regarded American Indian Art Magazine.

Chief of All WaterLionel Samuels Sold

Chief of the SkyLionel Samuels Sold